Many cases feature the controversial judge, Barron Field. A biography of this colourful character is available at 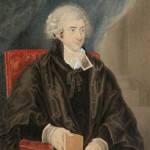 The Hon John Hamilton QC has collected together 37 of the first Supreme Court Equity Cases in the Colony of New South Wales. The cases give a fascinating insight into the legal and social landscape of the time.

John Hamilton QC explains that: “In the State Archives there is a document entitled “Supreme Court of Civil Jurisdiction Equity Cases 1817-1824”. It lists 75 cases. There is a folder there for almost every case generally containing documents for the case. Mostly these are pleadings and interrogatories with their answers, but usually there are no reasons for judgment; the cases more often than not did not go to trial. In no instance is there any record of oral evidence. However, the pleadings contained an extensive account of the parties’ evidentiary cases. The documents in the cases have been essentially copied and these versions are presented in this database. The cases are arranged in chronological order by the dates of their commencement. Click on the following for an outline of the cases to be presented chronological list of equity cases  Click on the following for early cases from Best V Swinton   to Hook V Gilberthorp  :  Early Equity Cases in New South Wales The following link gives access to another 23 of these early cases from Hovell V Charters to Wheelwright,  to Lloyd, Langston v Underwood, Kable and Underwood  Further Early Equity Cases

John is a former judge of the Supreme Court of NSW and  a much valued active member of both the Francis Forbes Society for Australian Legal History and the Australian and New Zealand Law and History Society.

ALSO on the History of Equity

Joe Campbell QC, formerly a judge of the Supreme Court of NSW and now an Adjunct Professor at Sydney Law School, has prepared a series of podcasts on the History of Equity.   They can be accessed if you cut and paste  the following link: https://www.youtube.com/playlist?list=PLhg7RxMYx8V1ZrK7zjeHHUsI57T05-pHY. These are an instructive introduction to the history of the Equity jurisdiction.

RULES OF COURT IN THE TIME OF CHIEF JUSTICE FRANCIS FORBES

A paper by The Hon John P Bryson QC Formerly a Judge of Appeal in the Supreme Court of New South Wales. Available at: Rules of Court Paper

5 Commentary on Rules of Court -33