Members of the Council of the Forbes Society 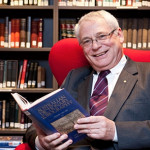